I spawn in the west end of the coast and decide to go hunting. North through the forest is a ok-ish loot run with three deer stands, a small shack and a barn with major loot. I find nothing worth mentioning in the first two deer stands but the third one contains and AKM with some spare ammo so I grab it. Still low on basic survival gear I decide to head north east and check the close-by barn. I can see the far edge of the forest from the deer stand so I take a rough heading and sneak across the open field and into the forest.

I exit the forest right where I planned and track a short length of the forest edge to the north until turning east and crossing the Komarovo – Pavlovo road. As I approach the road and prepare to cross it I keep observing my surroundings, especially to the south as there’s a building next to the crossing and it started spawning zombies around it. No incidents with the zombies so I cross the road and approach the barn somewhat carelessly but manage to avoid zombie detection.

When I’m next to the road north of the barn I hit the dirt as there’s a couple of zombies close by. I try to be as sneaky as I can to avoid the zombies so I crawl to the barn doors. I hear footsteps from inside the barn and a survivor pops into the door opening. He’s carrying a crossbow and before my fumbling fingers find the push-to-talk button I get a bolt through my sternum. I go into a shock and fall unconscious before I can react, the survivor shuffles around aggroing a zombie and then withdraws to south through the barn. As the aggroing zombies loses line of sight on the survivor it turns it’s rage on my sorry unconscious ass and the last thing I see on the screen is an hourglass and a zombie eating my face. That didn’t end quite like I planned it.

I respawn on the coast roughly on the same spot as last time, so I decide to try the same route again. So north through the forest and check the three deer stands. The deer stands are even more in vain than last time but this time I find the first sniper rifle I’ve seen in the game ever. The third deer stand holds a CZ550 but unfortunately no ammo. I decide to grab it anyway as I don’t have binocs and I think I can substitute the binocs with the scope for a while as I try to find some ammo for the gun.

Once again I head north east to the farm but find nothing useful there. From the farm I head somewhat east as I decided to check the Balota air strip control tower for loot. One thing I haven’t mentioned earlier is that everywhere I go I try to check the open fields for helicopter crash sites. I have never seen one but I know they spawn in the open when the server restarts so I keep my eyes open on them. I did some research and some of the results suggest the crash sites don’t spawn very close to the coast but then again it won’t hurt to keep your eyes open, right?

Anyway, I head east through the fields north of Komarovo and approach the air strip. I haven’t heard any gun fire or seen aggroing zombies so I enter the air strip perimeter through a hole in the fence next to the control tower and check it for loot. Still no ammo for the gun and nothing else worth mentioning. As I work my way down the tower I try to practice moving as carefully as possible, leaning around corners to see there without fully exposing my bulk to a possible hostile aiming back at me, same with the stairs and walking slowly on hard surfaces to keep the noise down.

I’m on the last turn in the stairs on my way down when a survivor suddenly jumps out from under the stairs. I turn my gun away to show I mean no harm and try to find the PTT again but then the bastard shoots me in the face once or twice. I start bleeding and shout through the voice comms that I don’t have ammo and mean no harm, while I bandage myself to stop the bleeding. This doesn’t stop him so I end up taking my last breath on the control tower staircase lying on the floor in a pool of my own blood.

Now, this dying is starting to annoy me. I’ve died a number of times without actually achieving anything or finding anything nice so I need to change my play style radically or just keep hoping I’d finally run into some less trigger happy players. Let’s see how this evolves. The first run is shown on the map in red, the second one is pretty much the same up until the barn and continues there in blue. 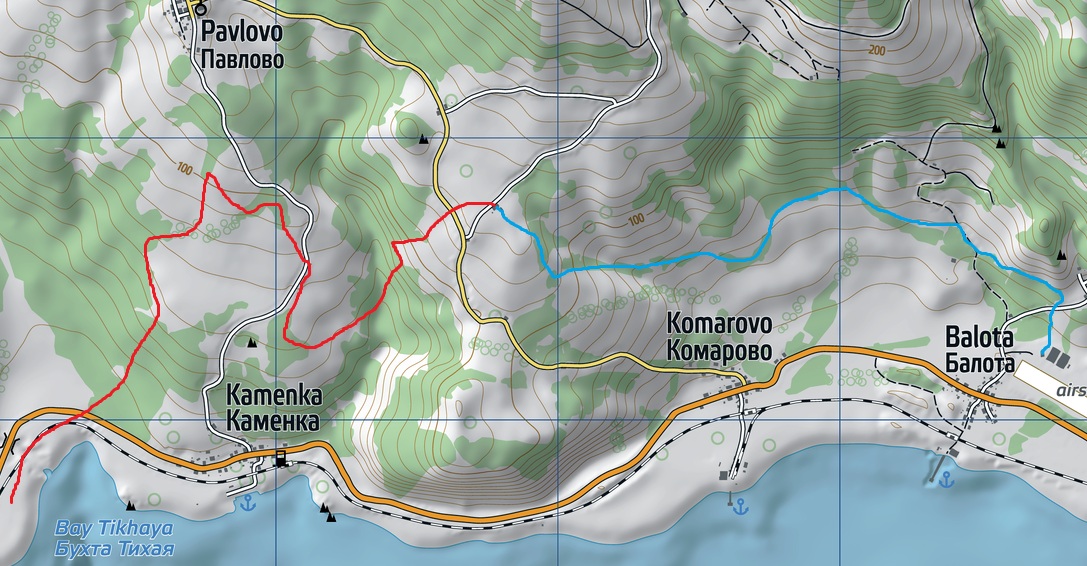 A map of two runs with identical beginnings and equally sad endings.

I'm a man with three passions (in no particular order, mind you): my family, cool gadgets (includes computers) and disc golf. I'm not too good with any of the mentioned, but I really do try. Honestly!
View all posts by Jussi →
This entry was posted in DayZ and tagged dayz, death, gun, map, survivor. Bookmark the permalink.

One Response to Double Jeopardy