I spawned on the small peninsula south west of Cherno and checked the single house there. Can’t quite remember what exactly I found but I’ll wrap up my possessions later on. From the house I headed north and checked the fuel station across the road. At this point I had found a nice supply of soda cans but only one can of food and no hunting knife so I knew I’d have to keep an eye out for food. I thought I’d go check the Balota air strip civilian hangars and the control tower, but when I approached it I heard shots from that directio and decided it’s time to see what the north holds for me.

I turned north, crossed the Balota – Vysota road and turned northwest towards the Windy Mountain. I navigated along the eastern side of a small ravine and then turned west across the road and into the open to get a visual on the first deer stand. Only zombies were visible and they were just spawning so I knew I’m alone at the deer stand and I could zoom across the open field and check the loot. The deer stand had an AKM and plenty of mags so I was now pumping some serious heat! A short distance north through the forest while keeping my eyes open for tents I checked the other deer stand but it had nothing worth mentioning.

I knew I couldn’t sustain myself in the wild so I decided I’d try to check civilian buildings more. A barn somewhat north from the deer stand looked like a logical choice, so a short tactical detour later I was lying flat on the barn floor. Still no food and not even drinks, just inferior weapons and crap.

I had never been to the Green Mountai so I decided I’d check it from a distance, so I exited the barn to north along a small electric line and then turned westish towards the Green Mountain. I knew the place was dangerous so I didn’t want to go to the complex on the mountain, instead I circled around along the northern edge of the forest patch and checked the three deer stands as I moved more westwards. I did a small poke towards the complex on top of the mountain, but never got close enough to check if there’s zombies already spawned or if there’s someone waiting for me. Anyway, I thought I’d check the barn with a major loot spot north of Zelenogorsk in case it would have food and also for the possible bus spawn. No luck with the food, but no incidents either, I evade the zombies and exit the barn directly to west across the pond and into the forest.

I next head to north and the possible pickup spawn southwest of Sosnovka but still no luck. I haven’t seen a single vehicle spawn since I started playing this game so I wonder if I’m just not looking hard enough. My food indicator is starting to be more and more orange so I’m in a kind of hurry to find something to eat. I have already consumed the only can of food I had so I’m walking on very thin ice here. I check the minor loot spots in Sosnovka but find nothing so I head north to the farm which has a fuel tank.

The barn is once again a lost bet and I’m now very close to starvation. It’s time to forget all carefulness and just rush for the food spawns. I exit the barn to the northwest and navigate across the forest patch until I reach the road on the north end of the small forest patch. From there I run across the road pretty much straight north, circle around the Pustoshka buildings and rush into the grocery store. Strangely I manage to avoid all zombies so I can loot the store in peace.

The store has some much wanted food so I eat one can and grab whatever I can. I still haven’t found a bigger backpack so it’s a tight fit to keep all the necessary stuff with me. While I’m in the town I decide to visit the church and light a candle for the fallen. The church yields a pleasant surprise when I finally find a map and a G17 with some spare ammo! I say my prayers and exit the town to the east.

I’m gonna split this adventure in half to keep it in a reasonable length, the rest of it will follow in the next post. 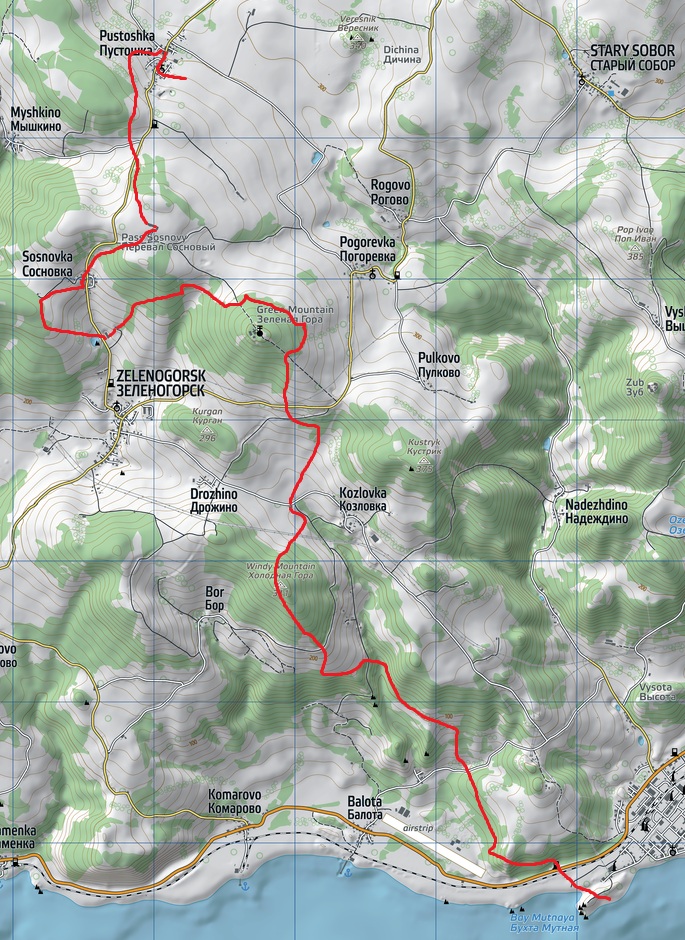 Map with the route to north

I'm a man with three passions (in no particular order, mind you): my family, cool gadgets (includes computers) and disc golf. I'm not too good with any of the mentioned, but I really do try. Honestly!
View all posts by Jussi →
This entry was posted in DayZ and tagged dayz, gun, map. Bookmark the permalink.

6 Responses to Trip to North